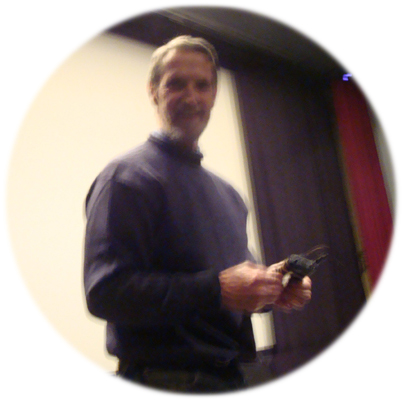 Articulate Improvisation: An Evening with Steve Paxton
MoMA, 23 May 2011

EDUCATOR AND SOCIAL PHILOSOPHER JOHN DEWEY said in Democracy and Education (1916) that it is the responsibility of the “older” to transmit culture to succeeding generations. In the case of 72-year-old choreographer/dancer Steve Paxton, the classroom, er, theater at MoMA was filled with dancers and dance enthusiasts of all ages.

Paxton, who demonstrated a groundbreaking approach to improvisational dance, “Contact Improvisation,” in the 1970’s under the influence of the radical Merce Cunningham (according to Paxton, an early critic said that Cunningham and his prankish partner John Cage “should be spanked”), spent the evening articulately lecturing about his choreographic roots, the principles he applies, and the way of education.

Paxton: Being inside a body… being a dancer…
is the most three-dimensional experience.

But first he walked onto the stage, deliberately, in joint-articulating fashion, to the end of the stage, whose profiling symbolic chair he neither occupied nor touched, and back to the center, where his chameleonic, fluid hands performed choreographic feats. Beginning with a guru’s story, Paxton described his first physical insight at age twelve with the lesson of the three bowls: ice water left, room temperature center, and steaming hot right. Left hand into left bowl, right into right. Next, he put each hand into the center bowl and experienced the sensation of heat in the chilled hand and coolness in the heated one. It was at this time, Paxton said that he learned that “the mind can move through the body,” which he later called “mind travel.”

Given his rumored reclusiveness, Paxton was quite forthcoming with the story of his career, beginning with high school gymnastics, college “free exercise” (or “floor exercise”) gymnastics, and his participation in Cunningham’s and José Limón’s companies. Of the former, Paxton said that, “I liked what he did to my brain. One side was culture and tradition and form… the other was innovation…. No one had seen anything like Cunningham.” Paxton also mentioned Judson Dance Workshop co-founder Yvonne Rainer, Martha Graham and Trisha Brown, among others, in recounting the scene.

Paxton said he was fortunate to be exposed to martial arts, specifically Tai Chi Chuan and Aikido. Tai Chi, said Paxton, “was very interesting… mass became clear… the weight and the gravity… the front and back of the body.” Aikido, he said, gives “a sense of the ‘elements of forward’… the readiness… the anticipation.”

An advocate of play, Paxton said that with dance, one can “begin to play games with the body, and the body becomes a kind of playground.” Indeed, Paxton’s films of his early contact improvisation experiments (his “Magnesium” was performed in 1972; he ran a video of “Chute” [1979], online here) had a playful, if mindful, quality. Even if they resembled a combination of wrestling and mosh-pit dives, these actually demonstrated the kinedynamic principles of momentum and balance that Paxton intended. Indeed, Paxton’s influential DNA is embedded in so many two-plus-person interactions in modern dance that it’s pointless to cite examples.

Paxton’s 1987 improvised performance of Johann Sebastian Bach’s The Goldberg Variations (1741; BWV 988; his scholarly introduction to Glenn Gould’s recordings online here) was the evening’s filmic performance highlight (the evening’s live highlight was always, without any historical or other competition, Paxton himself, always moving, if only his eyes). In Goldberg, Paxton resembles, for starters, a mime, a break dancer, a ballet dancer and a martial artist.

In the Q&A, Paxton stated that there is no art form that doesn’t require movement, using “the [sweeping] gesture” of Abstract Expressionism as an example. “Boredom,” he quipped, “inspires improvisation.” Improvisation (which seems to be a Paxton synonym for creativity) contrasts with conservatism, which, despite defining and preserving social stability, Paxton says, “is sure death.” Wrapping up an evening of pithy, highly educational pronouncements, Paxton spoke of his theory that space is spherical: “Being inside a body… being a dancer… is the most three-dimensional experience.”

Applauding conventionally with one’s hands after Paxton’s full body performance, one felt just a bit sheepish, and imagined Cunningham smiling from the wings at his pupil’s closing prank, taking us gently, and playfully, to school.

This entry was posted on Tuesday, May 24th, 2011 at 02:30 and is filed under Dance, The 250. You can follow any responses to this entry through the RSS 2.0 feed. You can leave a response, or trackback from your own site.